Subsidies for the SHPP: “We finance our own downfall from our own pocket” 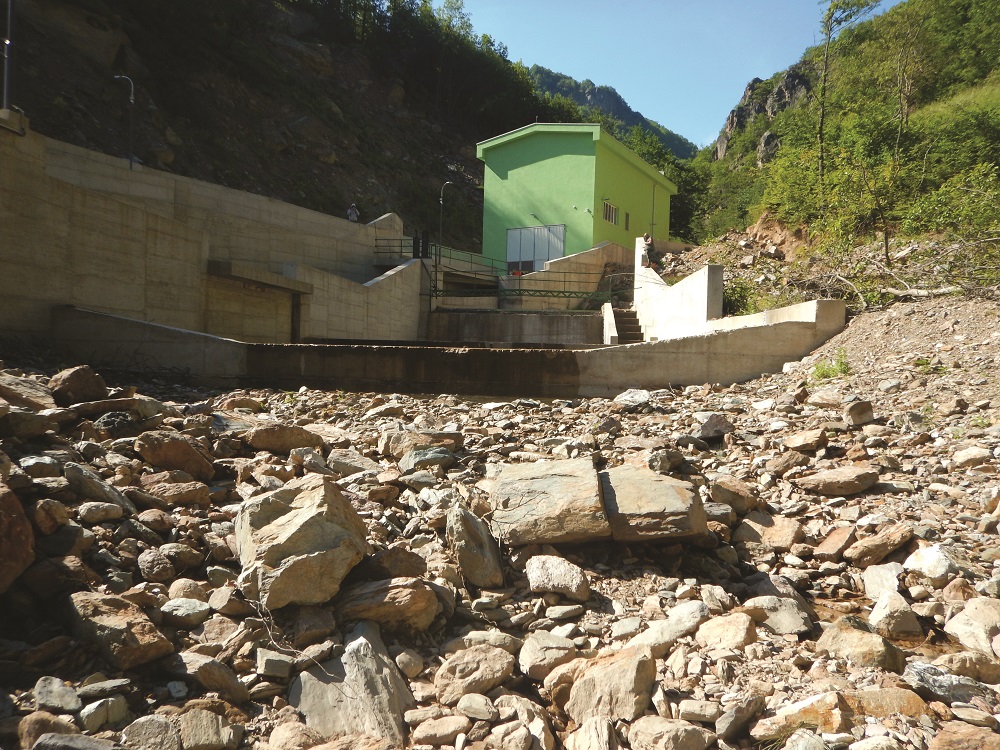 River Kraljušnica, dry riverbed after the construction of a small hydropower plant, PHOTO: A. Variščić

Bosnia and Herzegovina is losing 4 million KM annually due to the system of the concession fees as well as incentives for small hydropower plants. In an environment where the authorities are awarding concessions without taking into account the public interest and the plans to build over 400 hydroelectric plants, announcements of possible increases in fees and incentives would lead to enormous economic losses and unforeseen consequences for the most important resource we have. Drinking water.

The reasons for the massive investment of investors in the construction of small hydropower plants should be sought exactly in the established system of concession fees and incentives for renewable energy sources (RES), which all citizens of Bosnia and Herzegovina pay through their electricity bills.

Natasa Crnković from the Center for environment stresses that the citizens’ money for incentives for small hydropower plants should be channelled into reducing energy consumption, as well as real renewables sources such as solar and wind.

“The Center for environment has repeatedly stated that the investors have the greatest benefit of small hydropower plants and that the money that citizens pay for the fees for the renewable energy sources is not justified by any public interest. In addition to the devastating consequences, subsidised hydropower ecosystems are not financially viable. Why would citizens ultimately pay for something that produces losses? Why these funds are not directed on reducing energy consumption as well as real renewables sources such as solar and wind. ”

We pay our own downfall from our own pocket

Economic analyst Damir Miljević is the author of a study showing that BiH is losing money by subsidising the operation of small hydropower plants every day. According to his study, the total damage that will be caused by the further application of this incentive model over the next ten years is estimated at losses over KM 40 million, and this amount would be doubled if the incentive were granted to all applicants. 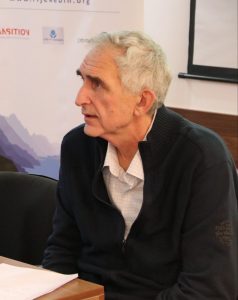 Miljević believes that the potential announcements of the increase of the fees for renewable energy in both BiH entities are an indication that the government continues pursuing an unreasonable and economically damaging policy of subsidising the RES construction through the feed-in tariffs out of the pocket of its citizens.

“Unfortunately, there is no political will to change the existing subsidy system, because, according to my information, the intention of the authorities is to keep the feed in tariff system in the future, although there are no rational economic, market or any other social reasons for this. Despite all the warnings that the existing system is socially harmful and does not sufficiently contribute to the achievement of the set goals of the energy transition, the connection between the policy and the investors is strong and that neither of them intends to give up. ” 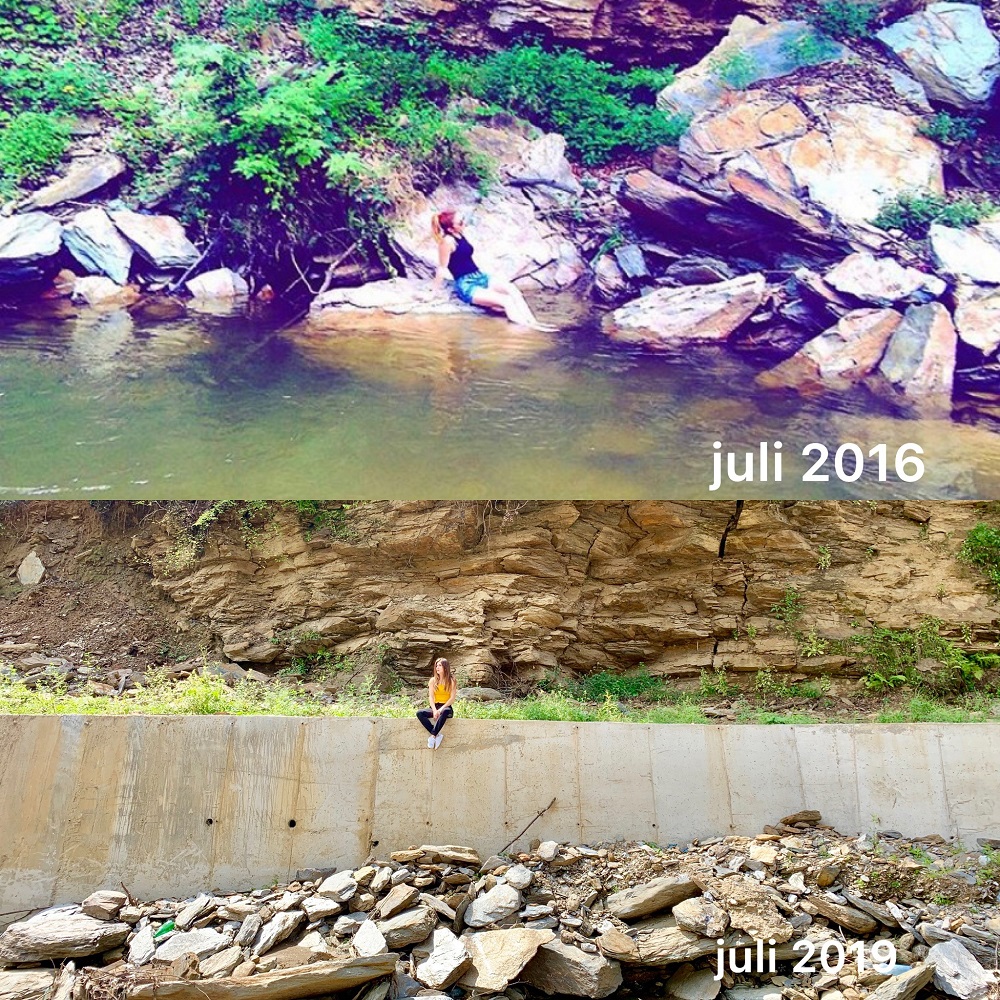 Miljević points out that this data is an indication that an unreasonable policy of subsidising electricity from small hydropower plants is the way in which eligible investors earn guaranteed profit out of the market.

“The catastrophic and socially and economically damaging policy of subsidising the production of electricity from the SHPP continues, despite the fact that the SHPPs do not significantly contribute to the achievement of the set goals on the participation of the RES in gross final energy consumption. This is proof that a growing number of investors, mainly those with good political ties, want to make guaranteed profit out of the market, which the authorities ,through this incentive system, guarantee. The imbalance of subsidised funds for small hydropower plants in relation to other forms of the RES is a consequence of the political decision to force the SHPP. A huge number of concessions were awarded in abundance under debatable conditions. The very low annual quota set for solar power plants has discouraged investors. ”

The FBiH Energy Regulatory Commission informed us that the guaranteed purchase price of electricity and the reference price are set for a period of 18 months. At this point, they could not confirm whether there would be a price increase.

“The current reference electricity price, as well as the guaranteed purchase price of electricity, are in force from 01/03/2019 and are valid until 31/08/2020 when new prices will be determined and announced. Given the fact that the calculation of these prices depends on a number of inputs, it is difficult at this point to say whether there will be an increase or decrease in the current prices. The current reference price of electricity is 0.108821 KM/kWh (10.8821 pfennig/kWh and it has been applied since 03/01/2019. 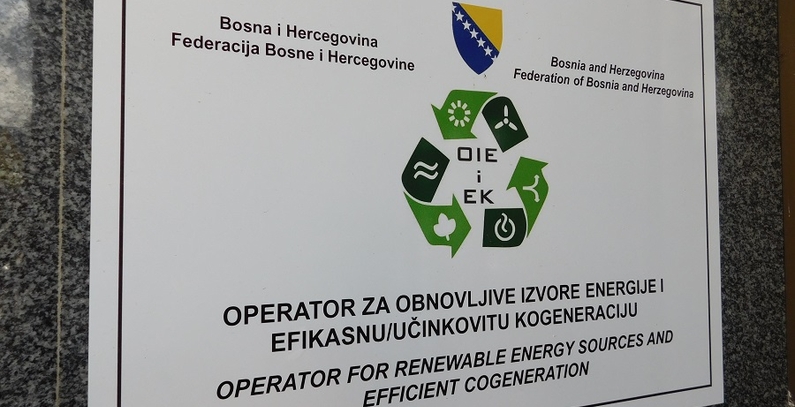 According to the information from this institution, director Boris Misirača banned communication with journalists. We would like to remind you that there are series of corruptive affair, which were covered by numerous BiH media. Ranging from the employment based on party affiliation, fraud in public procurement, loss of millions of KM.

The consequences will be immeasurable and catastrophic

Such a system of co-financing for investors is very attractive and has sparked a rush on concessions and the system of incentives, which has the consequence of endangering all watercourses in BiH. In this context, the announcement of the construction of the 400 hydroelectric power plants in 244 rivers in BiH is a threat, and not only in economic terms.

If the announcement of the construction of 400 hydropower plants in BiH is true, Miljević believes that this will lead to consequences that will be immeasurable and catastrophic. According to him, all will suffer damage except investors and political patrons. 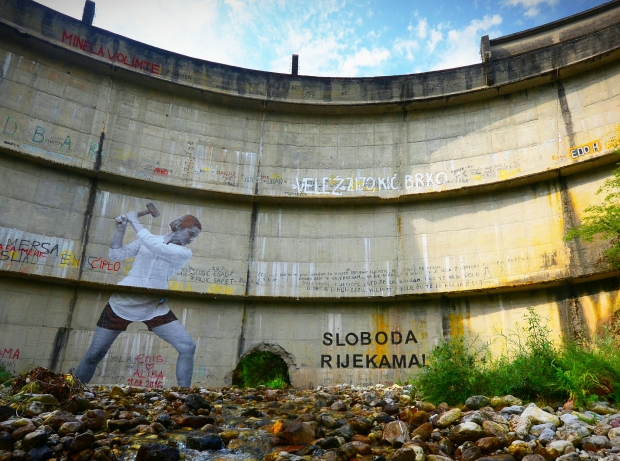 River Idbar: A mural on the dam, PHOTO: Dino Kasalo

“Since these are the SHPPs of derivative type in general, in which water is pumped into long-distance pipes, it will devastate biodiversity, the natural environment, endanger the groundwater level, and thus the availability of drinking water and the quality of life of people and local communities along rivers and streams. Only the investors, their political supporters and the banks that fund them will benefit from the whole process. Everyone else will suffer damage. The sad thing about all this is that the genocide against nature, wildlife and the most valuable resource of the 21st century, which is drinking water, is financed directly from the pockets of citizens and the economy through the RES fee we all pay through electricity bills, that are directly channelled through the RES operator into the pockets of the SHPP owners. In other words, we directly fund our own downfall with money from our own pocket. 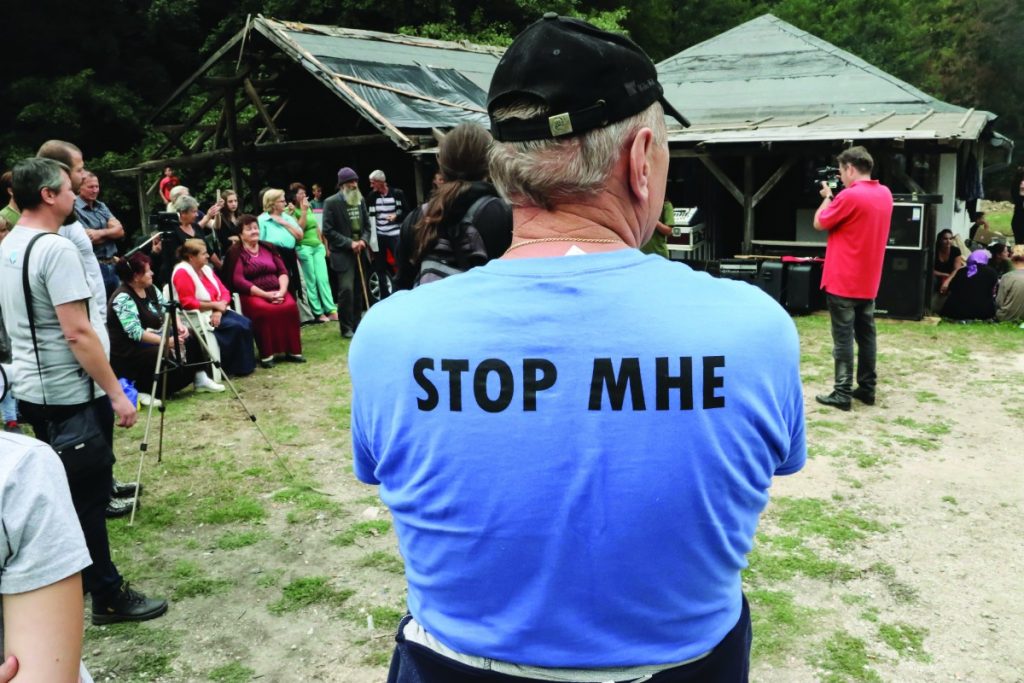 The total damage caused by the construction of small hydropower plants in BiH has not been assessed, nor can it be assessed at this time. In the series so far, concerning the consequences of the construction of hydroelectric power plants in BiH, we have written about the corrupt investor-politician connections, political pressures, the destruction of flora and fauna, displacement of the population, multimillion-dollar losses to the local community, and the fact that we finance with our own resources the destruction of resources that have not yet been fully privatised. That is, the mountain rivers, which, if the trend of small hydropower construction continues, will be a privately owned private property.

This article is part of a series of articles in cooperation between Center for Environment and the journalist Predrag Blagovčanin, as part of the campaign „Save the Blue Heart of Europe”